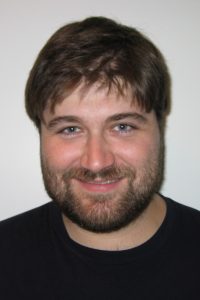 The Cochlear™ Nucleus® 7 (CP1000) sound processor gives recipients the ability to connect wirelessly to a wide variety of audio sources in several ways.

It is the first and only Made for iPhone (MFi) cochlear implant sound processor that lets recipients wirelessly connect to Apple® iOS devices and stream music, phone calls and more. In addition, Cochlear’s True Wireless™ technology, including the Mini Microphone 2 and 2+, the Phone Clip and the TV Streamer, allow for reliable, untethered connectivity to the sounds that recipients want to hear.

For dynamic FM use, Nucleus 7 processors are also compatible with Phonak’s Roger™ 20 integrated FM receivers. And, as always, a built in telecoil is available and can be used to interface with a variety of telephones, neck loops and looped environments, as found in some theaters, churches and meeting rooms.

All of these technologies are designed to help improve hearing performance and recipient experience in even the most challenging environments.

The Nucleus 7 sound processor provides recipients with an unprecedented level of control over mixing ratio, which is the amount of input presented to the user from accessory/telecoil input in relation to the processor microphone input. For example, the default pediatric accessory mixing ratio is 1:1 meaning that their streaming Mini Mic 2+ and their processor microphone are presented with equivalent loudness, allowing for good awareness of environmental sounds near the recipient as well as the target input from the remote mic.  This differs from the adult default accessory mixing ratio of 2:1 which results in a 6dB attenuation of their processor mic while streaming, so the accessory signal is given more emphasis. The mixing ratio is set by the audiologist using Custom Sound® 5.0 and can be varied from ratios of 1:1 through 6:1 (with increasing processor mic attenuation) or even accessory-/telecoil-input only.

In previous generation processors like the Nucleus® 5 and Nucleus® 6, recipients could change their mixing ratio using the remote assistant. The Nucleus 7 sound processor allows for much greater control of this mixing using the Nucleus® Smart App and, if sensitivity control is enabled, using the iOS Accessibility menu or ‘triple-click’ Accessibility shortcut. 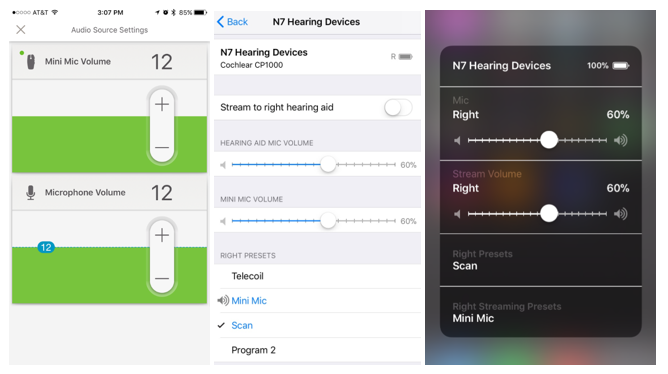 When streaming is active, users can make adjustments to the accessory/telecoil input and the sound processor mic independently and therefore create mixing ratios that can differ greatly from the programmed setting. This can be done in several ways:

Both the app and the MFi controls allow adjustments over a range of 21 steps from 0-20 or 0-100% respectively, and each step up or down results in an increase or decrease of 1.5 dB in gain on the input source’s signal.  So recipients can choose to emphasize or attenuate sounds from their accessories and Nucleus 7 sound processor in whatever mix they feel appropriate in their listening environment.  It is important to note that any changes made by the user to their mixing ratio will remain in effect only until the CP1000 is powered down, after which it will return to the setting programmed by the clinician in Custom Sound.  So if a recipient is consistently changing their mixing ratio to one that differs from this default, their clinician should consider adjusting the mixing ratio in Custom Sound to reflect the user’s preferred settings.

This chart shows equivalent ratios as seen in Custom Sound, the Nucleus Smart App and iOS: 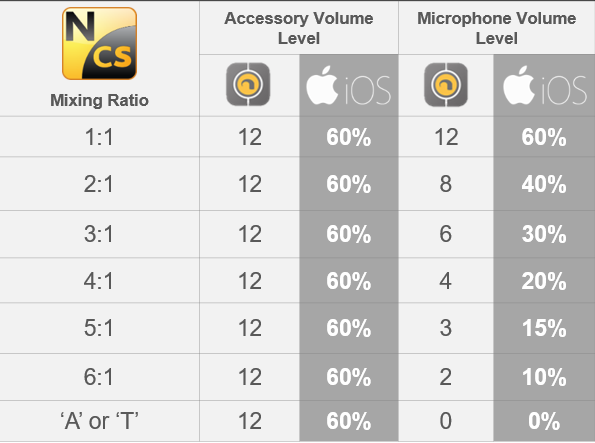 Mixing ratio controls in the Nucleus CP1000 processor is just one example of the many ways that Cochlear’s latest technologies provide both simplicity and depth of control to our Nucleus 7 recipients.

Dave Catlett is a Regional Clinical Training Manager for Cochlear Americas covering the Southeast and Atlantic regions.  In this role, he provides clinical training and mentorship for Cochlear field staff as well as developing and presenting clinical trainings for Cochlear’s professional partners.  He earned his Masters in Audiology at UNC Chapel Hill and his Au.D through the University of Florida.  Prior to joining Cochlear in 2005, David spent several years as a clinical audiologist at UNC’s pediatric cochlear implant program.

Apple, the Apple logo, iPhone,and iPod touch are trademarks of Apple Inc., registered in the U.S. and other countries. App Store is a service mark of Apple Inc. 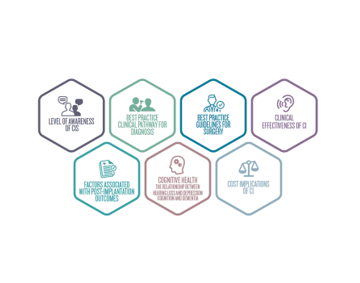 The first global consensus on the use of cochlear implants for the management of bilateral moderate to profound, or moderate sloping to profound hearing loss in adults was published online on August 27, 2020 in JAMA Otolaryngology Head and Neck Surgery.1

According to Professor Craig Buchman, Chair of the Consensus Delphi Process and Head of Otolaryngology –Washington University School of Medicine, the consensus is a major landmark in the treatment of hearing loss.

“The International Consensus Paper is the culmination of a systematic review and a consensus process, put together to inform steps towards establishing clear and consistent guidelines, and best practices for the evaluation and management of patients with moderate to profound, or worse, sensorineural hearing loss, including cochlear implants and their aftercare, so they can reach their optimal hearing outcome and attain the best quality of life.”

The paper covers seven categories across the whole care path.

Representatives from seven cochlear implant user and professional advocacy organizations provided comments throughout the process. One of the representatives, Barbara Kelley, President of the Hearing Loss Association of America described the consensus as a call to action for those involved in organising, delivering and receiving hearing health care.

“Globally, for up to 53 million hard of hearing people hearing aids might not be enough. The consensus empowers them to explore their opportunities with cochlear implant treatment” added Barbara Kelley.

Conservative estimates suggest that worldwide, only 1 in 20 adults who could benefit from a cochlear implant have one.2,3

About the consensus method

The process was guided by the non-voting Chair, Professor Buchman, supported by four voting steering committee members. The Delphi panel comprised of an additional 26 experts in the field of CI use, including audiologists and ear, nose and throat specialists across 13 countries. The seven representatives from international hard of hearing, CI user and professional advocacy organisations provided comments throughout the process.

Visit the online professional portal with summaries of the evidence supporting the global consensus as well as more information on the CAPAC  www.adulthearing.com

The Delphi process and medical writing support have been funded by Advanced Bionics, Cochlear Ltd, MED-EL and Oticon Medical. The funding organizations did not contribute to the design, facilitation or content of the Delphi consensus process. 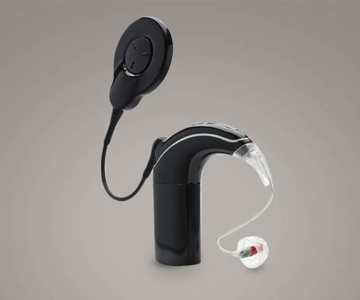 Objective: To demonstrate the long-term benefits of implantation in patients with high-frequency sensorineural hearing loss, this report provides 5-year follow-up on a group of implant recipients who were subjects of the Cochlear™ Nucleus® Hybrid™ L24 Implant System* pivotal clinical study.
Methods: The results of three related clinical studies were compiled to provide outcome data after 1, 3, and 5 years of implant use in a group of subjects who presented with preoperative high-frequency hearing loss and were implanted with a Nucleus Hybrid L24 (Cochlear Ltd., Sydney, Australia) cochlear implant. A subset of the 50 adult subjects (N532) who participated in the Hybrid L24 pivotal Investigational Device Exemption (IDE) completed comprehensive evaluations at 12 months postactivation, 3 years postactivation, and then as part of a postapproval study at 5 years postactivation. Testing included audiometric, speech perception, and subjective satisfaction measures.
Results: Mean unilateral speech perception performance was significantly improved at all postoperative intervals compared to preoperative best-aided results and has remained stable to 5 years postactivation. Ninety-four percent of subjects had measurable hearing, and 72% continued to use electric-acoustic stimulation in the implanted ear after 5 years of implant use. Subjective satisfaction results support objective performance improvements.
Conclusion: Results demonstrate long-term success of patients with high-frequency hearing loss following Hybrid L24 (Cochlear) cochlear implantation. Benefits include speech perception abilities significantly better than those in the preoperative best-aided condition, with additional benefit in those using electric-acoustic stimulation in the implanted ear.
Key Words: Electric-acoustic stimulation, cochlear implant, high-frequency sensorineural hearing loss, hybrid cochlear implant, hearing preservation, long-term outcomes.
Level of Evidence: 2b.

Download the study, Long-Term Outcomes of Cochlear Implantation in Patients With High-Frequency Hearing Loss, to read it in its entirety.

*The Acoustic Component should only be used when behavioral audiometric thresholds can be obtained and the recipient can provide feedback regarding sound quality. The Hybrid L24 Implant is approved in the U.S. for adults ages 18 and older. 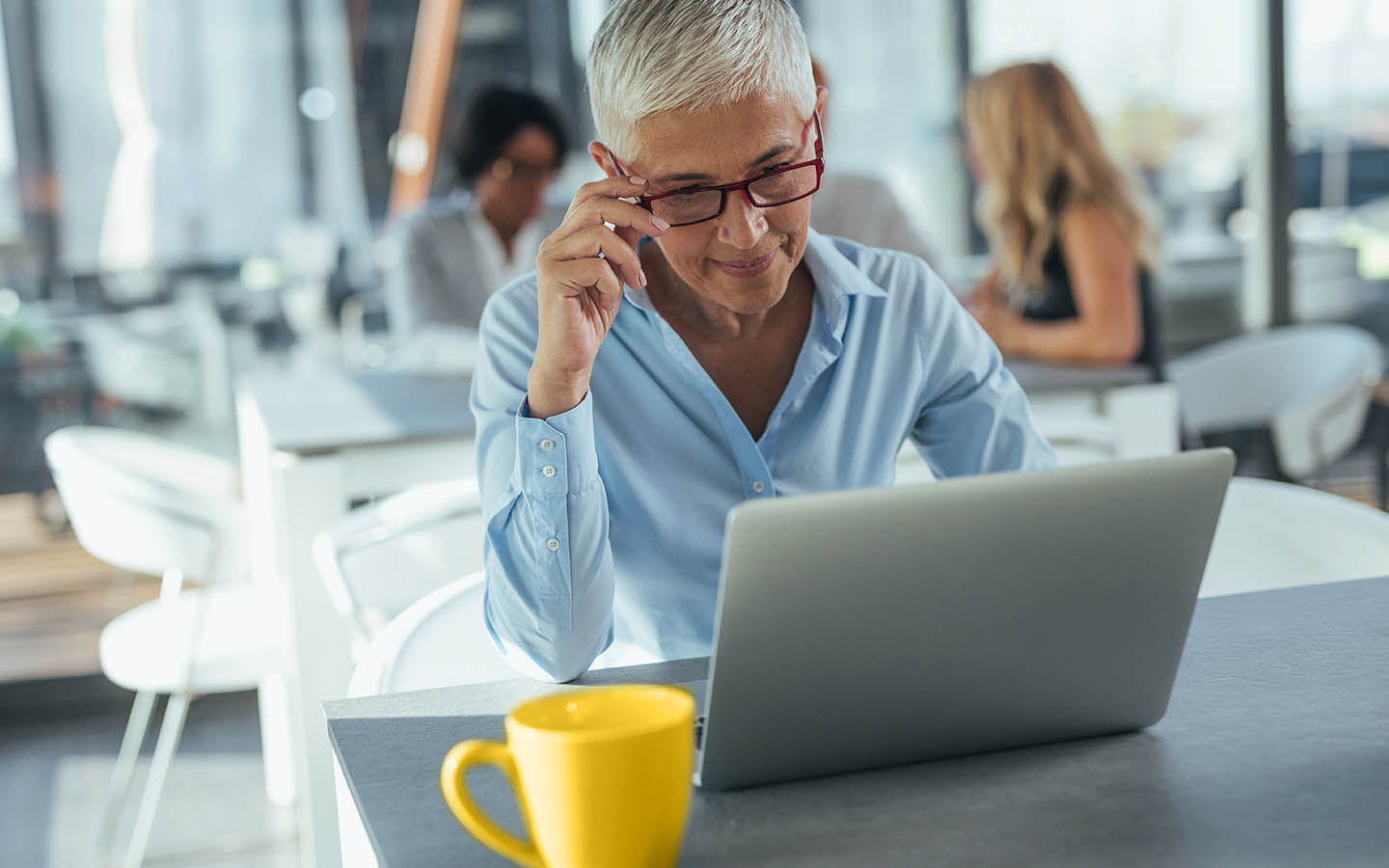 YouTube counseling videos available for you to use with your patientsby Jamie Schwartz / December 5, 2017
Feel the Beat, a dance studio for people with hearing loss, uses state-of-the-art bone conduction technology in their vibrational dancefloorby Jamie Schwartz / January 11, 2018 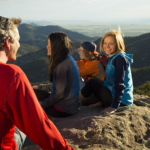